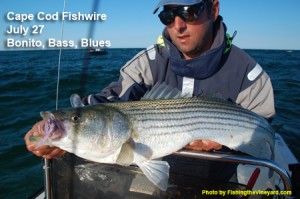 (Update: In thinking about this, I believe my fundemental problem is that while I’ve crowd sourced content generation, I am now at a point where I need to crowd source some of the content entry, formatting and editing tasks…)

I’ve been editing the Fishwire Reports at Reel-Time.com since 1995.  The task has generally been hugely manual, requiring tons of my time, most of which has happened over the years between the hours of 4am and 9am on Friday mornings.  In short, a really bad system.

We cover 6 distinct regions throughout the northeast.  Each area is the responsibility of a different writer, although last year I wrote the reports for two regions.  The reports each contain around 6 subregions, such as “Boston Harbor” or “The Cape Cod Canal.”

Generally on Tuesdays I send an email out to my sponsors (generally area fishing guides) and regular contributors.  Then over the next two days the reports and images come back in via email.  If the weather is good, I probably have close to enough for a report.  If not, I go into our forum and look for posts that contain info from the general area.

I do a ton of cut and paste, much of which requires me to use notepad as an intermediary, since half the email comes in with nasty word or other formatting embeded.  Also, I get many of the images at full res, as many of the guides don’t have or don’t know how to use Photoshop.  Hence photo editing is a huge component of the task.  The images are generally optimized, have a caption added, and get a photo credit.

Then I put together the best of the images to use as the story leads for the homepage.

The current system, if it could be called that, is custom coded php that dates back to the dark ages.  I plan to move most of the non-forum components of the site to a highly customized version of WordPress that we use for many  of our sites.   If needed, I have the capability to make WordPress stand on its head and dance.  I do a LOT of WordPress development.

My big problem is that I only see moderate improvement in the process no matter what I do.  Essentially, we’re managing a crowd sourced report here.  Many contributors, a writer, a photo editor,  and an editor.   How are other people doing stuff like this without having to use so many different skills?

The readers and sponsors really like the personal touch the writer gives the report.  I wouldn’t want to go to just a directory of reports, that’s been tried and failed repeatedly.  In fact, our presentation is one of the big differentiators.

Can you see a better way?  Do you have examples of how others are doing this in new and better ways?   Or should I just look at getting a couple interns to make it work manually?

As always, I look forward to the shining light of your collective wisdom…

(Oh, I’ve had a suggestion: why don’t you just do a blog – the short version to the answer is that I did that in 2004 as a test and found that only a very small subset of sponsors would post, so I ended up cutting and pasting again.  Plus, the subset that did post was way over represented on our site.)

In the Cape Cod Fishwire for Reel-Time.com this week I spent a little more time than usual actually delving into the issue of rotten inshore catches of striped bass off the Boston coast. Basically I note (with statistics) that two of the past 4 years have been some of the worst spawning years since the 1980’s, when the fish almost ceased to exist. Not a good thing…

To the North in the Boston Fishwire, I have good reports of tuna and even some bluefish showing off Plum Island. The stripers are making a better show of it in both Boston and Plymouth Harbors, but its still a dog of a season for most of us. Check out the commercial catch stats I posted in the Cape Cod report…very interesting. 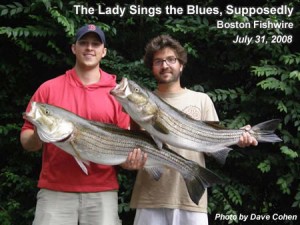 A busy afternoon – I’ve posted new reports for Boston and for Cape Cod on Reel-Time.com

In Boston, we’re still waiting on a real appearance by the bluefish.  Very strange, they haven’t been so late that I can recall.  It kind of reminds me of the stories the old timers told me back in the 1970’s that they remember not seeing blues in the 30s and 40s north of Cape Cod. 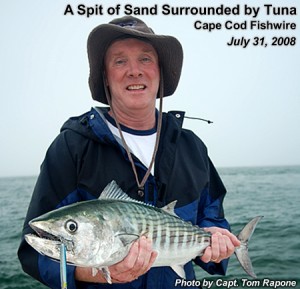