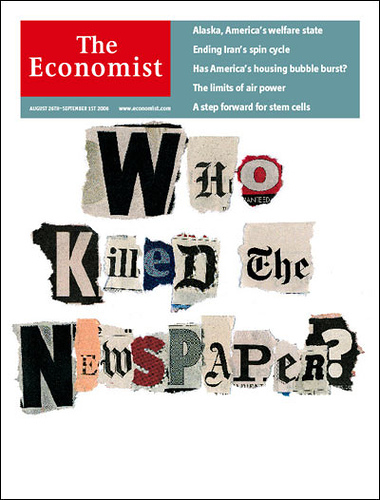 No time to write today, but I picked this none-to-delectible tidbit up from Alan D. Mutter at Newsosaur while surfing during lunch and had to share:

In one of the most startling of the potential initiatives, an amazing number of publishers of all sizes are giving serious consideration to eliminating print editions on certain days of the week, according to private conversations with operators who requested anonymity.

Monday, Tuesday and Wednesday editions, which typically carry the least amount of advertising, appear to be at the most risk.

With demand for newspaper advertising this year plummeting in every category (including online since March), industry ad revenues in 2008 are likely to be no better than $38 billion, or nearly 25% less than they were when sales hit an all-time peak of $49.4 billion in 2005.

An interesting notion, and one I hadn’t trully considered until just now.  I suspect in the end, publishing only a few days a week will be unworkable for most publications due to union contracts, etc.  Additionally, many of the hard costs endemic to print publishing and delivery will remain, ie, the presses, the trucks, etc.

The big point to keep in mind is that no one would have ever mentioned such a notion out loud in the hallowed walls of a newspaper even a year ago.  How far we have fallen…

The Project for Excellence in Journalism (funded by the PEW Charitable Trust) has an excellent report out on the Changing Newspaper Newsroom – with some very interesting statistics that seem to imply the newspapers still haven’t got the message about their value proposition.

It has fewer pages than three years ago, the paper stock is thinner, and the stories are shorter. There is less foreign and national news, less space devoted to science, the arts, features and a range of specialized subjects. Business coverage is either packaged in an increasingly thin stand-alone section or collapsed into another part of the paper. The crossword puzzle has shrunk, the TV listings and stock tables may have disappeared, but coverage of some local issues has strengthened and investigative reporting remains highly valued.

Well, that sounds good, but in looking at the graphics we see that the biggest area of cuts is what many point to as one of the two biggest differentiators with online journalism, the Copy Editor (the other is local coverage, which we’ll get to in a minute.

The thing in my mind is that you can’t hold the lack of editing up as the big problem with blogs, citizen journalism, or whatever you want to call it, then club your own copy editors like so many seals.  They’re either important or they’re not.

As an experienced writer and blogger I can tell you that I am much better when I’ve got a competent copy editor to work with.  Not only do they catch the typos, they’re the folks that ask “What are you, writing in esperanto?  Say what you mean.” or “This section needs to be rewritten, it doesn’t say what you think it does.”  It’s the reason I so often post here and am corrected in the comments section by my astute readers.  The truth is, on a blog, you’re my copy editors.

The real answer is that they’re devoting *proportionally* more space to local news, and have contracted both the overall number of “resources” they have available (magic decoder ring: resources were formerly known as “people” or “journalists” prior to the ascent of the accountants) as well as decreased the number of pages they’re publishing overall.  There’s no mystery here, and the big news will be how this all works for them.  Personally, I think the newspapers missed their opportunity in 2000, and they probably won’t be getting another one.

If reporters are laid off and the paper doesn’t report their actions – did it really happen?
It is, perhaps, an unforgivable journalism sin that this story is not being told fully by some closely-watched U.S. newspapers. Reports from The New York Times and Editor And Publisher indicate that editors-in-chief of Tribune newspapers in Florida are neither announcing nor publishing the newsroom layoffs they are making at this very moment.

From the E&P item: “Of concern to several staffers, however, has been the Sun-Sentinel’s lack of reporting on the cutbacks, with no stories appearing in the newspaper or on its Web site about the cuts. In most cases, newspapers have reported on their own cutbacks prior to the final reductions.”

Right on Robb – newspaper, cover thyself…to paraphrase the old saw about physicians.  The wholesale carnage in the industry, while getting mention in blogs such as this, is generally going under or even un-reported.  As I noted before, we’re talking about people, even if we cloak the humanity in terms like “resources”.  And these actions while they may impact newspaper readers a little, are both “life and career altering events” for the people experiencing them.  I know, I’ve been there, and over a year later, even though I’m well employed, I am still dealing with the vast ramifications, both personally and financially of that layoff.

Okay, I hadn’t seen this when I posted my previous bit.  All in all its a very bad day for the print media.

…trends in circulation and advertising––the rise of the Internet, which has made the daily newspaper look slow and unresponsive; the advent of Craigslist, which is wiping out classified advertising––have created a palpable sense of doom. Independent, publicly traded American newspapers have lost forty-two per cent of their market value in the past three years, according to the media entrepreneur Alan Mutter. Few corporations have been punished on Wall Street the way those who dare to invest in the newspaper business have. The McClatchy Company, which was the only company to bid on the Knight Ridder chain when, in 2005, it was put on the auction block, has surrendered more than eighty per cent of its stock value since making the $6.5-billion purchase. Lee Enterprises’ stock is down by three-quarters since it bought out the Pulitzer chain, the same year. America’s most prized journalistic possessions are suddenly looking like corporate millstones. Rather than compete in an era of merciless transformation, the families that owned the Los Angeles Times and the Wall Street Journal sold off the majority of their holdings. The New York Times Company has seen its stock decline by fifty-four per cent since the end of 2004, with much of the loss coming in the past year; in late February, an analyst at Deutsche Bank recommended that clients sell off their Times stock. The Washington Post Company has avoided a similar fate only by rebranding itself an “education and media company”; its testing and prep company, Kaplan, now brings in at least half the company’s revenue.

This was also the subject of the entire “This Week In Tech” Podcast with Leo Laporte which came out this morning.  Some very salient points were made:

Listen to the full podcast here (The Innovators Dilemma – episode 138).  It’s a wonderful commentary…and I can’t wait to hear with the This Week in Media crew have to say later in the week.

Alan Mutter at Reflections of a Newsosaur had this on Saturday, dissecting the decline:

Despite the repeated promises of publishers to recast their struggling franchises as signficiant online entitites, last year’s interactive revenues amounted to no more than 7% of total newspaper industry sales. This meager performance was achieved in spite of the fact that print sales, which represent the vast bulk of the denominator in this ratio, fell by 9.4%.

Further, the 18.8% jump in online revenues at newspapers was only three-quarters of the size of the 25% annual sales increase that powered over-all online sales to a record $21.2 billion in 2007. So, newspapers are trailing considerably in online market share at the same time their traditional print advertising business is melting down.

David Churbuck has a bit on this as well:

I want to see the percentage state of online revenue in the newspaper industry — that last paragraph infers a decline in online revenue for newspapers, which I know is not the case in the UK at least.

I’ll post more in the coming days as I ruminate more on the issue.

The NAA (National Association of Newspapers) has revealed that newspaper ad revenues are off 9.4% to $42 Billion in 2007 vs. 2006.  That’s a huge number, even for the sinking fortunes of print media.  And one we’ll surely eclipse when the next round of figures are released next year.

I have worked with newspapers for years, and frankly, I don’t often pick them up looking for ad info anymore.  If I want to look at used boats, I go to CraigsList.com, for my news, I go online, or movie times, I go direct to the theater site (which is a link in my Iphone so I don’t even use the computer.

Events calendars in papers work for me, otherwise, I think they’ve got to start embracing alternative delivery models.  I said this last year and I’ll say it again:  someday the papers will outsource their printing and delivery functions and become information generation centers.  It’s what they do best.  And they should used every delivery mechanism that can work (financially) for them