In a paper entitled “Visualizing the Signatures of Social Roles in Online Discussion Groups” published in the Journal of Social Structure, the authors,
Howard T. Welser of Cornell University, Eric Gleave of University of Washington and Microsoft Research, and Danyel Fisher and Marc Smith of Microsoft Research assert that 2% of the online forum or usenet culture consists of “answer” people who spend a disproportionate amount of time answering questions for the online public at large.

We identify a structural signature for answer people with three features based on the local network attributes and the types of threads to which answer people tend to contribute. First, answer people tend to be disproportionately connected to alters with low degree. That is, they reply to relative isolates, authors who themselves answer few, if any, others. Second, their local (degree one) networks tend to have small proportions of three-cycles (i.e. their neighbors are not neighbors of each other) and they seldom send multiple messages to the same recipient (few intense ties). Finally, answer people tend to reply to discussion threads initiated by others and typically only contribute one or two messages per thread.

The crux of their point, which is based upon usenet statistics, is that these “Answer” people tend to be responible for a substantially higher percentage of Internet content that the general online population.  From that, we can surmise that they are of extreme importance to social networks, even though their patterns of usage tend to be point to point contacts, as seen in the star shape of the network diagram included in that article, 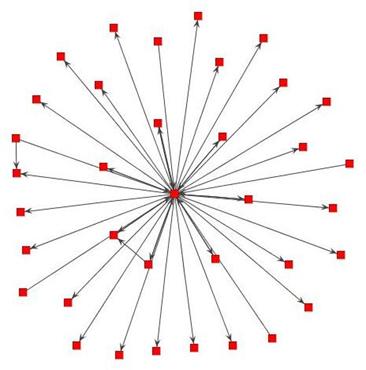 versus the tight interconnected blob that represents other users interactions. 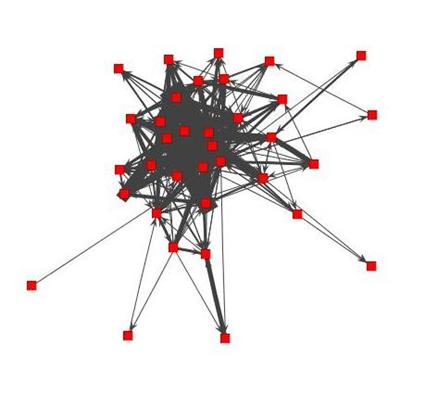 This begs the queston: are social networks dependent upon users who themselves are not particularly served by that network?  If these “Answer” people tend not to interact in a typical manner within the network, then what is the driving force for their presence there.

Okay, I’m a simple guy.  The diagrams and hard core academic speak only get us so far.  This is what I’ve seen in online communities and social networks that bears out their research.  It’s not statistical (but I guess I could pull stats) and subject to my perception.

I have always attempted to recognize these answer people for what they truly tend to be, mentors.  They generally have expertise, and gain little from interaction with the newbies in the crowd.  They’ll take the time to answer the same question on the 50th time around, just as they did on the 1st.

How are they served by the network or community as a whole?  Prestige and vanity enter in for some, but for others the knowledge that they indeed fulfill that mentor role is enough. I can think of several archetypal “answer people” who actually use screen names and have over as long as a decade kept their true identities generally secret.

So what is the ramification for the new trend towards social networking? It certainly suggests that you will need a means to identify, motivate and hold onto these ‘answer people.”  The truth is, that while social networking tends to carry a “mobocratic” stigma, we need to firmly embrace meritocracy to succeed.

My thanks to the authors, Welser, Gleave, Fisher and Smith for some absolutely tremendous research which I will no doubt be citing for years to come.

You can follow an interesting discussion trail on Slashdot, under the title: “Visualizing “Answer People” In Online Discussions “

And, on the other hand, we may just have statistically quantified a computer geek…