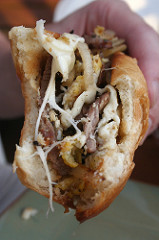 A sub shop in Derry, NH is trying to claim ownership of the term “Steak Bomb” via a trademark petition now before the US Patent Office. You can read all about it at wmur.com. (I picked this up off a post by Firefly on the Reel-Time Forum – thanks…)

My thoughts on the subject:

On the other side of the equation, there is some viral benefit to the discussion.

So my general take is that this is a net positive for these guys. They’ll sell more sandwiches, and in general benefit from increased exposure, although their trademark petition is bound to go down in flames. Of course, the cost of the lawyer may not be recouped…

Just for the record, I’d prefer to be known for having the *best* Steak Bomb, not for being the originator, especially when it is clear they are not the originator of the Steak Bomb. For my money, the best Steak Bomb is at Victoria’s Sub Shop in Hingham.

3 Replies to “Ownership of the Steak Bomb”