Okay, I’ll admit it – I tend to be a little obsessive if I find a television show I like. Which is fine this year, as we may be witnessing the worst crop of new shows ever, and it doesn’t matter anyways because the screenwriters will soon go on strike and we’ll be doomed to even more “unscripted” reality pablum.

So with the hours I’ve been working, I thought over the weekend I might as well see if there was anything in among the shows I haven’t sampled yet that was worth watching. So I fired up my trusty browser and headed off the the web sites of the big networks.

This isn’t a new experience for me. I actually watch one of the few shows from previous years that I like almost exclusively online – “My Name is Earl.” It’s got a Thursday 8pm time slot and I’m generally out and about on Thursdays.

NBC has been posting all the episodes online for free once they’re aired, and I think it’s a great way for them to help keep viewers up to speed on a show that’s got a story arch which might lose them if they were to miss an episode or two. And even better, they present the shows with limited interruptions so you can catch up quickly. 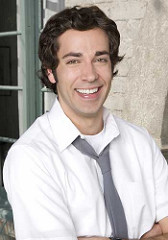 I was lucky enough that my first selection from NBC was a funny take on the geek saves world action genre – “Chuck.” First off, excellent casting, and even better writing. This one’s a winner for anyone that’s into tech and has a sense of humor. It’s basically set in a “Best Buy” type store and our boy Chuck is a member of the “Nerd Herd.”

Again, this is a show with a story arch of the kind that typically has huge fan drop off the longer it hangs around. Traditionally, these shows don’t have legs, because viewers miss a few shows, then can’t catch up. They figure they’ll wait for the DVD, but the DVD doesn’t come until the shows been cancelled.

NBC offers good, usable presentation. You’re forced to watch a short ad at the beginning and at the normal ad breaks, but it’s pretty darned good. They’ve got easy to use buttons for you to select either episode or scene you want to view. Basically it behaves the way you want.

The only negative bit I have to say about NBC is that they put all the episodes of Chuck online, but didn’t put the most important, the pilot, which I’d say all viewers need to see to get up to speed.

Luckily, in the Chuck forum, I was able to find a link to Amazon Unbox, where they said there was a free download of the pilot. That had expired, but for $1.99 I was able to download and watch the first show. Amazon Unbox was somewhat unimpressive, requiring me to download a viewer, and then taking close to an hour to download the show. Something like 1.3 gig file size. On the plus, the show did look nice, and supposedly can be patched into a regular television, although I haven’t even thought of trying that.

NBC wasn’t so bad, but not so over at CBS. While they are offering video, I found their interface to be clunky, and had major viewing issues on a very basic level. While trying to watch an episode of NCIS and when I touched the slider bar to go back a little to try to catch something, it dropped me into a whole separate (and much earlier scene) then wouldn’t let me get back to the scene I was watching. Since the scene I had been watching was about a half hour later, I gave up. And it happened again when I tried to watch an episode of the unit.  Hint: if you put a fast forward button on a video app, it should work.

At ABC, I checked out “Pushing Daisies” and at first couldn’t figure out why it was jumping around so much. Episode recap…they should really note that on the clip. When I went to look at full episodes, unlike the other three networks, I was forced to download a media player plugin for Firefox. Uh, aren’t there enough of them out there already? Do I really have to restart my browser (and dump the work I have going on another screen) before I watch anything? And why do you autorun a video advertisement on your homepage? If someone were to dial in while at work, and their speakers were on, they’ve alert the whole office.

That’s the point that I gave up.

Here’s the down and dirty synopsis: The “old” three get the basics, with the exception of CBS who’s got major issues… All community forums, trying to foster the social on their sites. The video experience wasn’t quite up to par on CBS or ABC, but one could probably get by. NBC does it best, with limited ads, and video presentations that work. But the other guys aren’t that far behind.