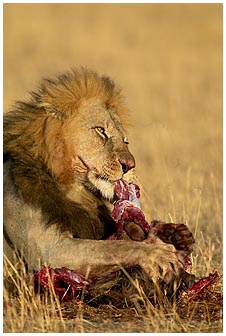 A two-year-old pet lion was on the loose in Canada’s backwoods near the nation’s capital Wednesday, sparking a hunt by police, officials said.The 150-pound (70-kilogram) male African lion escaped overnight Tuesday from an Indian reservation and was last seen near the tiny village of Maniwaki, north of Ottawa, said Melanie Larouche of the Quebec provincial police.

Schools and day-cares in the region were alerted and asked to keep children indoors, she told AFP.