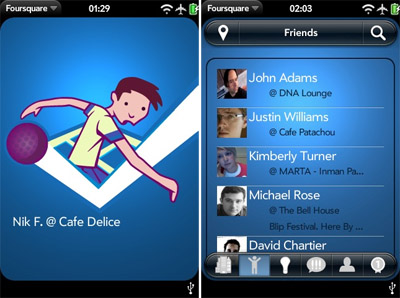 Over the past few months I’ve been messing with Foursquare…the geo location service-based social network-game.  Frequent readers will possibly remember that I’m not a really big fan of sharing geo location information, even though I’m perhaps one of the few who has directly had his life saved by cell phone geolocation.

Foursquare is an interesting study.  By turning the geo location service into a game and allowing the most frequent visitors to locations to earn the title of  “Mayor” of that spot, as well as providing badges which users can earn for certain actions, they’re amassing a fairly comprehensive database of mostly bars and restaurants around the globe.  They’ve beautifully applied some of the best features of online communities in a way that has allowed them to expand at an exponential rate.

I’ve got to admit, even with my desire to not allow my wife, boss or anyone else to have ubiquitous access to my moment by moment movements throughout the world, I kind of like Foursquare.  It’s fun, and I like the game aspect.  As a services, it’s generally unpretentious, it doesn’t try to be all things to everyone, it simply does geo location sharing and does it well.   They’ve fully embraced mobile apps, as one would expect and while I’ve only tested their iPhone app, I can tell you it works reliably and is simple to use.  Further, I did provide feedback to them, particularly on their early assertion that Worcester, MA was best categorized as part of Providence, RI. They listened and got away with the entire notion of location networks entirely.

That success has bread instant competitors, due to the low barrier to entry in this type of service.  In fact two weeks ago, the Yelp service, which Foursquare had linked to for reviews, announced they had added location based check in as part of their service.  It’s always fun when one of your partners turns on you…

That said, I think that both services will continue to coexist.  Yelp does reviews well and while I haven’t tested their checkin service yet, I will.  I don’t necessarily have a problem with using both.  However, I tend to see the game aspects of Foursquare vs. the uberFoodie  networking bent of Yelp as somewhat unique.  Hence, I’d consider using both.

Now we’re getting word that Facebook will enable location based checkins, and SM folks are predicting they’ll slaughter poor Foursquare.  In my book, they’re dead wrong.  Here’s why:

As a case in point, let me point to the Facebook starting to post FriendFeed streams in the main news stream this week.  Now, without my permission, and certainly against my will, all of my Twitter feed has started appearing in my Facebook profile.  If I’d wanted that I would have configured Tweetdeck to send to both.

In fact, I just went into Facebook and found that I’ve got all kinds of apps like “Birthdays” , “Marketplace” and “Family Tree” which are installed, giving the application owners unfettered access to my profile and activities, even though I never installed the applications.