“It was like Mookie’s hit took 30 days to roll between Buckner’s legs.”

Any Red Sox fan with half a brain could not have been shocked by Wednesday’s epic failure.  With the exception of Ellsbury, Pedroia, Aceves and Scoutaro, this was a team that either gave up in early September, or flat out never really cared to begin with.

I could get into the numbers, such as the 6-18 from Sept. 3, $160,257,476 team salary, the anemic OBP of some of the players, etc.  In my mind, the real problem doesn’t come through in the numbers.  We had guys who were seemingly incapable of making anything happen when it mattered.  Adrian Gonzalez, for one, seemed to pile on the personal numbers at the times when we really didn’t need them.  When we needed that hit, with the game on the line, his bat went silent.  He was not the only one who was AWOL in the clutch.

There is no tomorrow for this team, and rightfully so.  They wrote their own story, with multi-millionaires whining about their travel accomodations, unable to play when they were needed due to “discomfort”, and with plain old fashion piss poor performance.  This team requires radical surgery if for no other reason than to redeem some shred of dignity in the eyes of the fans.  We need to put a few of these curs down!  Throw some heads on pikes! Geld those horses! 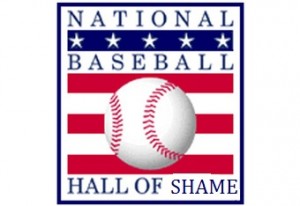 The mantra for the season, starting in April, was always “This was just one game. We’ll do better tomorrow.” It excused every loss.  In the end, they got what they deserved: any one of those losses would have sent them to Tampa for a tie breaker.  Two would have had them playing in October.

Perhaps the Red Sox should consider adding a special patch to the uniform of every single player who was on this club, to be worn until they retire, or until the expunge their shame with a World Series.  Brand the bastards so that we might recognize them more clearly in the future.

Heads will roll, and rightfully so.  I don’t for a second believe this was the fault of Terry Francona.  The issue starts with management, and is reflected in the bloated payroll of the club.  We’ve now got a massive payroll, aging players of suspect  durability, and no clear vision going forward.

Find the problems and fix them now. We, the fans have a limited tolerance of multi-millionaires who fail.  We made you guys, and you damn well owe us better than you gave this year.

Here’s a hint: stop with the excuses and own your shame guys.