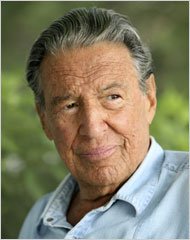 We are all a little less today, for the loss of a great newsman, Mike Wallace, formerly of 60 Minutes.  He was a slave to the story; where it lead and who it lead to be damned.

But this isn’t a memorial for a man I didn’t know.  It’s a memorial for a profession and ethos that is gone.  I’d honestly love to hear what he’d have to say about today’s world of media bias.

I’m not sure I’d want to associate my name with an industry in which the only institution that had the guts to hop on the story of presidential candidate John Edward’s epic 2008 zipper problem was that bastion of journalistic integrity, The National Enquirer.

Put aside your predilection towards one side or the other, let’s think about that one.  The stories were whispered on the campaign trail in 2008, but no one would touch them. Some  would say because he conveniently siphoned votes off of the at that time nominee apparent, Hillary Clinton.  No matter, the fact is that a candidate for President of the United States went without media scrutiny throughout the 2008 primary season.  Would that have happened this time around, say if it was someone like Rick Perry?  Read more here.

The John Edwards extramarital affair refers to the extramarital affair admitted to in August 2008 by John Edwards, a former United States Senator from North Carolina and Democratic Party presidential candidate. The affair was initially reported by The National Enquirer, a US supermarket tabloid newspaper, but was given little or no coverage by many sources in the US mainstream media.[1][2][3] The Enquirer cited claims by an anonymous source that Edwards had engaged in the affair with Rielle Hunter, a filmmaker hired to work for his presidential campaign, and that the relationship had produced a child.

Then last month we find there is video that WGBH in Boston, a PBS station, had of then Law Professor Barack Obama supporting Derrick  Bell, PHD, an academic professing radical race theory. Again, if Rick Santorum had introduced similar fire brand, it would have been immediate news.  Read about it here…

“The bombshell is the revelation of the relationship between Obama and Derrick Bell,” Pollack said. “Derrick Bell is the Jeremiah Wright of academia. He passed away last year but during his lifetime he developed a theory called critical race theory, which holds that the Civil Rights movement was a sham and that White Supremacy is the order and it must be overthrown.”

It’s not just on the left.  Fox News is perennially accused of bias.  Again, citing Wikipedia…

Writing for the Los Angeles Times, Republican and conservative columnist Jonah Goldberg indicated his belief that Fox News was rightward-leaning: “Look, I think liberals have reasonable gripes with Fox News. It does lean to the right, primarily in its opinion programming but also in its story selection (which is fine by me) and elsewhere. But it’s worth remembering that Fox is less a bastion of ideological conservatism and more a populist, tabloid-like network.”[13]

Fox News host Bill O’Reilly has stated that “Fox does tilt right,” (although he states this in specific reference to the coverage of the Iraq war, not FNC’s coverage in general), but that the network does not “actively campaign or try to help Bush-Cheney.”[14][15]

So on to the thing we have lost: honest, unbiased journalism, the kind that Wallace did; follow the story where it leads and pull back every curtain.  Unfortunately our media now seems to have a hotline to the party they support.

Newsflash: NBC, NY Times, Fox – if you’re taking your directions from a political party, you’re not in news, you’re in public relations.  The people of the United States deserve better, and you should show a little pride.  Now go find a REAL story and stop carrying water!