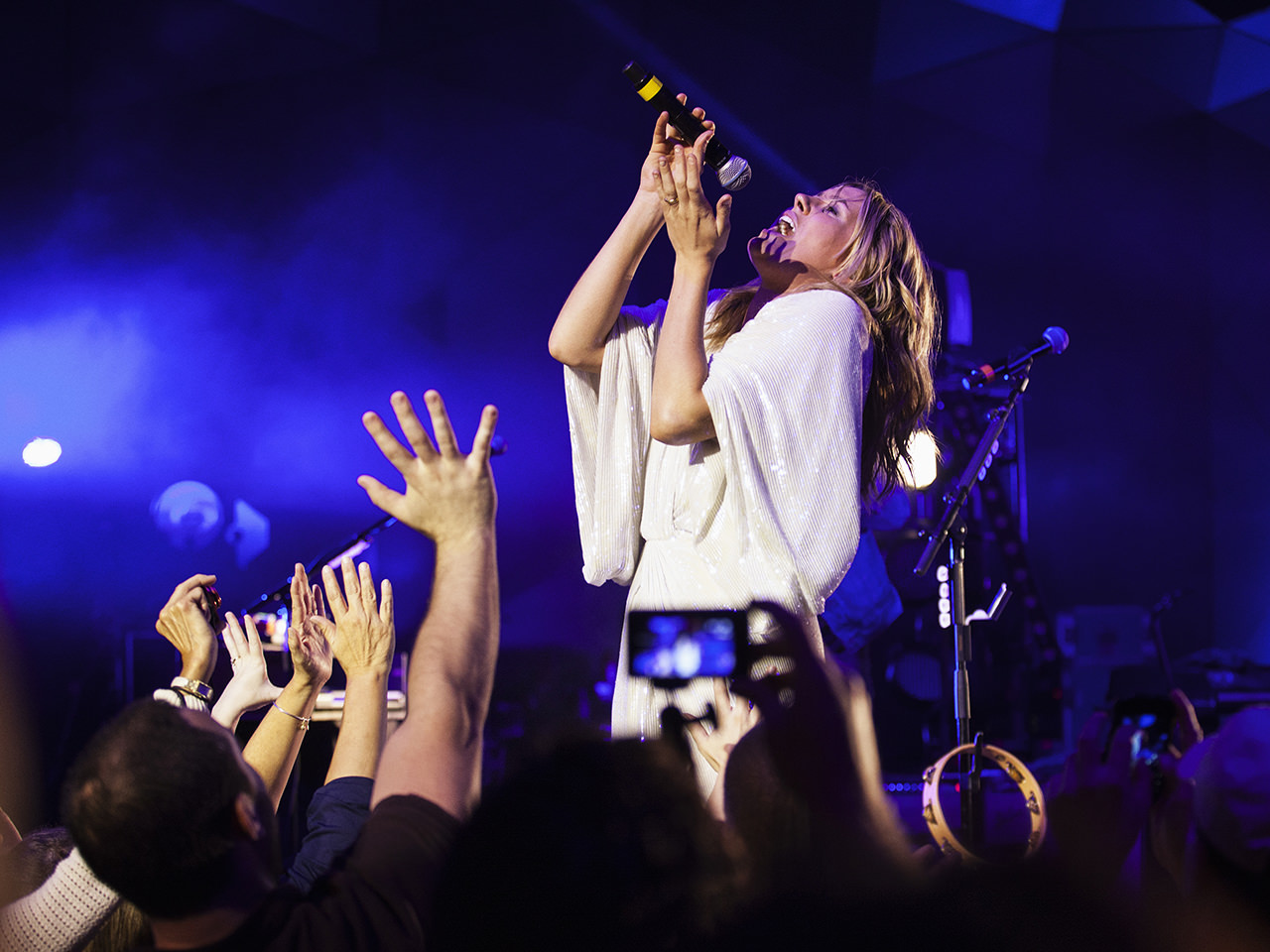 There is hope for music after all, and it comes in the form of a hippy chick from Vermont 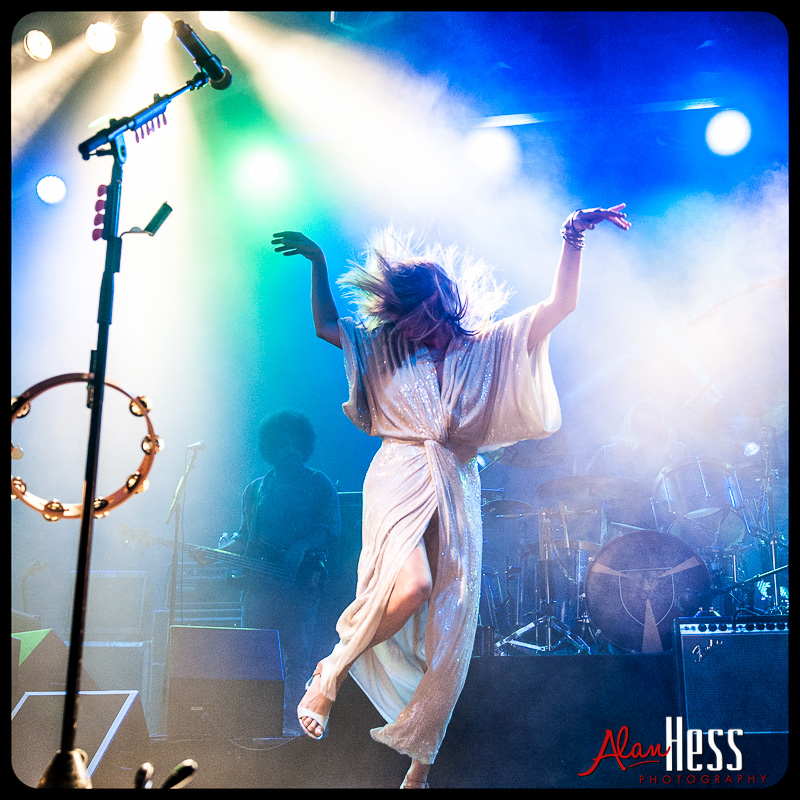 Rock isn’t dead; in fact it turned up at one of the least likely venues, Tanglewood in Lenox, summer home of the Boston Symphony Orchestra on Monday night and it came on the bus that brought Grace Potter and the Nocturnals to town.

From the minute they took the stage, the crowd was on their feet, and they remained that way the whole way through the band’s energetic 2 hour plus show.  From the start, with an up beat “Medicine” off the band’s eponymous 2010 album, Grace had a hold on the crowd.

The early set was  laced with material off the latest album, “The Lion, The Beast and the Beat”, released in late 2012, with “Never Go Back”, “Timekeeper”, “Keepsake” all featured prominently.

From there, Grace launched into a request for “Treat Me Right”  a song off her first album, released in 2005 entitled “Nothing But the Water”.  Here their jam band roots shown, with a well matured, smoky, sultry version of the song, delivered down tempo.  A thoroughly different treatment than the album, or the earlier faster paced, heavier versions of the song.

From there, they moved straight into another early song, “Stop the Bus”, a personal favorite for me.  The song, which has become a real standard, was a tight fast moving bit, that launched them into a serious 3 guitar jam.  As they rocked side by side, I remembered why it is I love jam bands; the creative humor.  Did they really just do the guitar jam from Lynyrd Skynyrd’s “Freebird”?  It sure sounded like it…but I guess I’ll have to wait for a tape to show up on archive.org to be sure.

They slowed it down with “Falling or Flying” off “This is Somewhere” (2007), but not without a quick tease of “Cortez the Killer” as Grace played the acoustic guitar intro to the song.  Midway through the song, another quick tease as she sang 2 verses of Cortez…wow!  For those who remember, it was Grace’s 2006 Jammy Award appearance with Joe Satriani that many would say really launched the band, during which they played “Cortez the Killer”.

Guitarist Ben Yurco stepped out on acoustic to give us an interlude, starting with the intro to Heart’s “Crazy on You” then into a blistering tribute to Bill Graham with The Who’s “Overture” from Tommy, then back into “Crazy on You” before he was joined by the band, who launched into scorching version of the Heart classic. 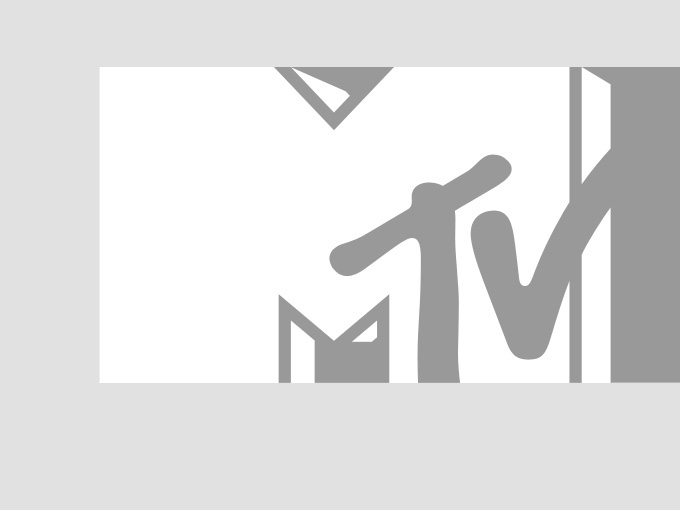 Again, this is one of the things that makes jam bands fun.  The liberal use of cover songs provides a great entry point to people, like the Tanglewood crowd, who might not be familiar with the GPTN repertoire.   It’s like an invitation to new listeners, and also provides them with a serious barometer for the musicianship they are witnessing.  “Oh, on THAT level…”

And the band is certainly all about removing barriers to entry.  They’re extremely well represented on Archive.org, via Twitter and on Facebook. They do it right.

Beyond that, there is one thing that is made clear throughout a GPTN show: these folks love to play music.  You can’t fake that level of enjoyment; they clearly are having as much fun playing for us as we are listening to them.  That energy translates to some often interesting music.  Such as when the entire band gathers around the drum set for a drum solo, or into the absolute dervish-esque frenzy that is Grace on stage. 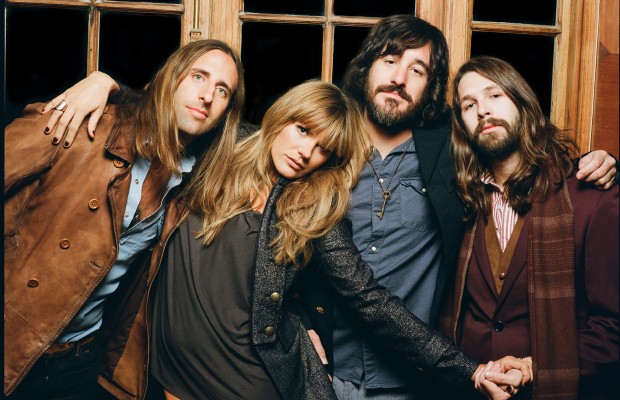 For her easily most recognizable song, “Nothing But the Water Part 1 and Part 2” Grace started off with a guitar solo using one of her Fly Vees.  The usual slow, melodic part one was played off by Grace’s rough, almost harsh, guitar.

Now I’m ready, it’s my time
If I give a nickel, I might get a dime
Only the water can help me now
I’ll find glory somewhere, somehow

-Nothing But the Water Part 1

As the band rejoined her, they launched into the frenetic beat of Part 2, with the audience firmly in their grip.

The set closed with Paris, a song that made the cross from jam band to the pop world, clearly marking these guys as “a band on the move”.  Then, after a rousing ovation, the band returned for their encore.

They started with “Stars” a song fast becoming one of my favorites.  This highlights Grace’s incredible vocal range, as well as the deep emotion she is able to convey through her songs.  It could literally make you cry…

Then into the title track of their latest album “The Lion, The Beast and the Beat” – a fast paced, guitar heavy track with a pulsating, almost tribal beat.  From there, into a shocker, Pink Floyd’s “Time” then back into TLBTB to close.

2 hours of fast paced, music.  Grace Potter clearly has no need for a yoga or aerobics, as she spent the whole time dancing, playing, and literally owning the stage.  It’s a serious bunch of musicians that can keep up with her, and the Nocturnals are certainly that level of serious.

Don’t take my word for it.  Go and see her Sept. 6 at Comcast with The Allmann Brothers, or, thanks to Nancy Nutile-McMenemy watch the songs posted below via Youtube.  You can also catch up with their vast list of concert tapes (audience recorded) on Archive.org.