CNBC posted on the newspaper outsourcing issue yesterday, and noted that not only is copy editing going overseas for a trial, one of the OC Register’s parent companies papers is now sending pages to New Delhi for layout.

Mindworks Global Media will copy edit some of the papers stories for a one-month trial starting next week. And a community newspaper owned by the O.C. Register’s parent company–it didn’t name which one–will outsource page layout to Mindworks, which is based outside New Delhi.

This isn’t enabling any layoffs–not yet. The company insists it’s just a test, and it won’t affect reporting or decision making and that O.C.-based editors will continue to oversee the month. Orange County Register Communications has been suffering through a rough patch. As its circulation tumbled, dropping the company from being California’s third largest paper to its fifth largest, the company has done three rounds of layoffs in the past year.

That’s big news – since paginators are typically members of The Newspaper Guild (I am fairly certain that Freedom Communications has a contract with them). And even bigger news is that this story has only been picked up in a handful of spots around the web. Either the stories in stealth mode, or perhaps there just isn’t anyone who cares anymore. 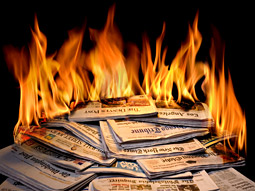 When Reuters did this 6 years ago, we all laughed at them. “Want curry with that?” Now respected American daily The Orange County Register has begun a test using a New Delhi firm for editing tasks. From BusinessWeek:

Orange County Register Communications Inc. will begin a one-month trial with Mindworks Global Media at the end of June, said John Fabris, a deputy editor at the Register.

Mindworks’ Web site says the company is based outside New Delhi and provides “high-quality editorial and design services to global media firms … using top-end journalistic and design talent in India.”

So what’s it mean? In the short term, nothing. In the long term its just one more bit of evidence that the print publishing model for newspapers isn’t going to work forever. In fact just minutes ago The Washington Post posted this:

…We wonder and worry, too. Anxiety has intensified this year with an accelerating decline in newspaper advertising, and it has hit home for us in a particularly painful way this spring, first with the early retirements of scores of colleagues and then, this week, with Len Downie‘s announcement that he’ll step down Sept. 8 after 17 years as executive editor.

Meanwhile, Bloomberg last week noted that The New York Times has seen it’s biggest Ad Revenue drop of the year during May.

The deterioration in May advertising mirrors drops at other U.S. newspaper publishers. Gannett Co., the owner of USA Today, reported yesterday that newspaper ad sales fell 14 percent in May. Those declines follow the industry’s worst quarter on record in the three months through March, according to the Newspaper Association of America.

“Expectations were that 2008 would be similar to 2007, but clearly things have gotten worse,” John Morton, an independent newspaper industry analyst in Silver Spring, Maryland, said in an interview. “Classified is in a tailspin, and there’s no hope for newspaper advertising until they win back some of that revenue.”

Meanwhile, in the This Week In Media Podcast this week, Alec Lindsey suggested that 2010 was the year that the model would break for the broadcast television market, stating that it would probably be the first year in which a revenue decline would be seen in the Upfronts. So, Mr. Television, your time is coming…

The real message here is that the traditional media model is utterly broken, and while it may be too late for print, television might still have time. My money is on the new online media providers and the networks slowly cutting their affiliates and the cable outlets out of the loop.