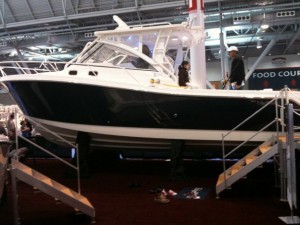 I shot plenty of video as I walked around the 2011 Boat Show with my two daughters, but I haven’t had time to post edit and honestly, I’m not sure it’s all that good to begin with.  My hand shake (essential tremor) has gotten bad enough that I don’t think I should be handling the lens work anymore.

My initial thought was that there were a whole lot more ski and sun boats this year.  The true coastal fishing machines were somewhat few and far between.  In general, I found the prices on most of the boats utterly shock worthy, enough that I question who has the money to spend on a 42′ boat that’s north of (touching pinky to chin in the best Dr. Evil I can manage) $1 MILLLION DOLLARS.  I guess that’s a good way to weed out the folks who would have trouble tossing a grand or two into the fuel tanks a weekend.

I’m sure there were a lot of other monsterously priced center consoles, but here’s my take: for $65k, I’d give up and start chartering exclusively.

Boat dealers, you know where the comment form is…many of you will remember it from last year…flame on.

Not enough?  Here are the reports from last year and the year before…