(Note: I wrote this on the second day of the boat show, but only now, two weeks later have I been able to find the time to process the images…)

Yesterday was one of the days I look forward to for the entire year: the day I attend the New England Boat Show at the Boston Convention and Exposition Center on the pier in Boston.  I’ve been attending as long as I can remember, first tagging along with my dad, then later by myself and now with my daughter Mackenzie.

In some ways, my dogged attendance is a bit out of character, as I suspect even if I’d won the Powerball Lottery, my ingrained Yankee frugality would keep me from ever buying a brand new boat.  I mean, the things lose like half their value as soon as they hit the water, and the rest soon there after.

This years show was particularly poignant given the growing economic crisis.  Walking into the center, you could smell the odd melange of new fiberglass, carnuba wax, and desperation hanging in the air like  Gloucester fog.  The show floor itself was 2/3 the size of the show last year.

A few quick signs of the times:

My “This is an abomination before God and Man” award goes to the nitwits that thought it was a good idea to build a motorized Kayak.  Not only is it a bad idea, it’s downright dangerous.  If your ass is too lazy to paddle, don’t buy a kayak.   A motor will just encourage people to go places they shouldn’t and they’ll end up there, unable to paddle back under their own power if the motor fails.

While I find these boats to be generally a little light in the freeboard area, which is a huge concern for New England boaters, I thought they’d come up with the a center console layout that is really different and could be great in bad weeather.  On the other hand, I worry about boats that appear to have had the full on Lexus treatment.  I fish, hence things get bloody.  My boat is a tool, and this looks more like something my wife would drive.

Starcraft has apparently dropped the manufacture of the 21′ Mariner center console, a boat that I firmly believe was just what cash strapped New Englanders need.  As a salesman noted to me “Starcraft has a long and cherished history of being ahead of the curve, and giving up at exactly the wrong moment.”  Think about the fuel savings of an aluminum boat, the trailerability, etc.

Grady White has come out with a 35′ Express, that without even looking into the cockpit could win the “Most Ill Timed New Model” Award (although I reserve that for another manufacturer).  To give you an idea of the house of horrors that is the Grady White Pavilion, let me tell you this:  They are listing along with their show special prices, the monthly payment you can expect on your TEN YEAR LOAN.  Talk about sticker shock…how about $3,452.00 a month for the next decade… 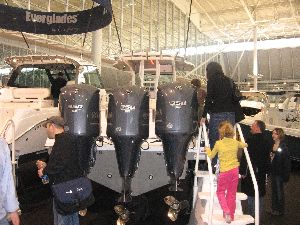 Ah, but the 35′ Express.  It’s a generally well laid out boat, well fitted and comfortable express, with two 350 Yamahas hanging off the back.  I suspect it’s meant to have 3 of the beasts back there.

I noticed that most of the boats I’d have wanted to see weren’t there.  The dealers I talked to said “yeah, we’re selling…just did a deal…” but frankly, I don’t believe them.  I never once saw anyone stop at one of the boat finance booths or step into one of the negotiation offices at the bigger booths.  I mean, unless you’re buying with cash, do we really believe they are loaning for boats right now?  What would you need, like 3/4 down (and I’d suggest without 3/4 down in cash, you shouldn’t be buying a boat anyways…).

Oh, my vote for “Most Ill Timed New Model Award” goes to the Sabre Express 42′ – a bit of pure luxury that will set you back a mere 3/4 of a million, before you start adding electronics or anything.  The boat is nicer than my house…,  comes with a pair of Zeus pod drives (that means you’ve got joystick controls above) and enough mahogany and teak to have denuded a substantial rainforest all on it’s own.  Of course, this isn’t a boat that I’d ever consider buying, and it is an absolute work of art, but do you really think there is a market for waterborne objets d’art in the current financial climate?