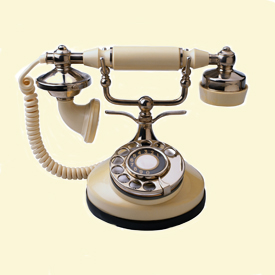 Sprint Nextel Corp. has told about 1,000 disgruntled cell phone customers they will no longer be their cell phone provider. From the Houston Chronicle:

Analyzing customer accounts, Sprint identified about 1,000 over the past six months to a year calling customer service centers at a rate 40 to 50 times above average, and the roughly 40,000 monthly calls strained Sprint’s ability to serve other subscribers, said Sprint spokeswoman Roni Singleton.

An interesting move for a company that’s had trouble signing up new customers.  Strangely enough, they will announce (soon) a new campaign under their Nextel brand aimed at replacing your landline.  Nextel customers will now be given a wireless router to set up at home, where they will be then able to access the service over voice over IP (VOIP) thus saving their plan minutes.  The campaign will be similar to that offered two weeks ago by T-Mobile and described here.

(Disclaimer: No inside information here, it was picked up off NBC news this morning, and confirmed via the article cited…)

So let’s do the math – they’ve dropped their support of their whiniest customers, who they say have used support services at a 45% higher rate, and they’ve done it on the eve of launching a new Wifi landline replacement service.  Since the landline replacement plan relies on the use of a wireless router, which would be set up by the consumer, I’d say that Sprint Nextel Corp. has little confidence in their neediest customers ability to set the service up.

It’s one thing to decide to drop your problem customers.  It’s entirely another to do it publically.