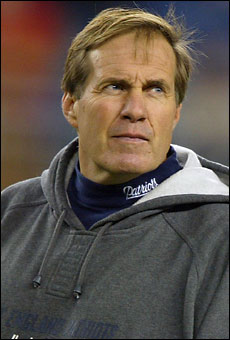 One of the fellows I was talking with lasst night (didn’t catch the name, sorry) made a very interesting point about the Internet. We were talking about the cheating fiasco in the NFL which ended up with heavy fines for Patriots coach Bill Belichick and the lost of a first round draft pick, which is the NFL version of the death penalty.

His point was simple: if this happened in 1993, it would have been swept under the rug. Due to the Internet, things can’t be covered up easily anymore. Everything is right there for the conspiracy minded fan to pick up and macerate on.

He pointed out that the Denver Broncos cheating on the salary cap to include superstar John Elway was a far more egregious violation than video taping the coaches on the sidelines, and that only resulted in a cash fine and the loss of a third round draft pick. As he correctly points out, even if you could read all the play calls, you still have to physically play the game, and that is 95% physical execution.

So what the heck does all this matter to us? Well, as marketers and business owners, we’ve got to realize the times have changed. We used to wield much more weight, we could control our story. Those days are over. Now when we make mistakes, we can expect the spotlight, for better or worse, to shine upon us. Life moves at the speed of light on the Internet.

As bad as that could be for us, we should also consider that when bad things happen, we also have an incredible opportunity to make them much, much worse. If we react in “the same old way” we’re going to get a trip to the marketing woodshed we won’t soon forget. The lesson here is that when bad things happen, you’ve got to be upfront, honest, apologetic and only then can you move on.