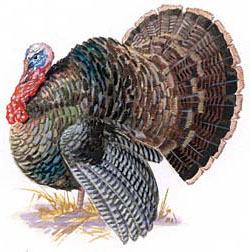 Once upon a time, there were no turkeys in Massachusetts…at least the feathered version. That has all changed over the past 20 or so years, in one of the unsung wildlife management success stories of of our lifetimes.

From the Boston Globe:

“We were turkey-less for many years,” said Wayne Petersen, director of the Massachusetts Audubon Society’s Important Birds Area Program. “And then we decided it would be quite nice to get them back on the landscape.”

Now there are over 20,000 birds across the state, and they’ve shown an interesting ability to adapt to both suburban and even urban living. With predicatable consequences…

As such, Brookline police issued a statement last month, telling residents what they should – or should not – do if they meet a wild turkey in town. The basic advice: stay away from the turkeys. But still, people keep calling police headquarters to report the strangest sight: Turkeys in downtown Brookline.

Okay, now I know you’re thinking how lame these folks must be to be frightened by a little old turkey. Check out this video:

As they say, when life gives you lemons, make lemonade…

Or just call your local professional animal removal specialist…(sorry, Regan’s not local for Massachusetts residents…but he’s a great guy, recently featured on Mythbusters, and we’re working on a new site for him…)