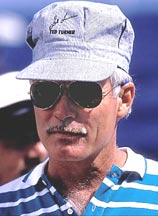 Mike Collins pointed this out to me yesterday: Ted Turner is the USA’s largest landowner, with more than 2,000,000 acres. To put that into context, the total acreage of Rhode Island (our barometer of measuring bigness by contrast to smallness) is just 776,960 (that figure includes the waters of Narragansett Bay. Why’s this matter? States like Nebraska are concerned that Turner will one day create a vast wilderness area and turn it over to the Federal Government. While that sounds good, it would remove the land from their property tax roles overnight.

While Turner is a big time rancher, who is known for raising buffalo, I don’t know if he’s really “doggone serious rancher” like his pr flack says, or if he’s got a one of those Super Villan things going on.