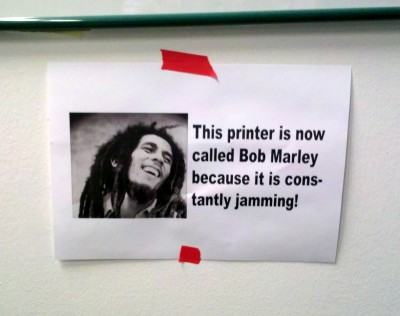 Over the time, we expect that technology will improve.  The general notion is that gadgets become cheaper, with richer feature sets, and finely tuned reliability as they mature.  We see this throughout tech, in computers, smartphones, tablets, etc.  Everywhere, except printers.  Let’s face it, home printing technology has become harder to use, less reliable and has generally been on a downward spiral since the invention of the ink jet printer.

Back in the 80’s, I could run thousands of sheets through my tractor feed dot matrix printer  (I think it was an Epson LQ 590 or similar) a day.  The thing might as well have had a hopper into which whole trees could be fed, it was that good at processing paper into printed material. Ribbons for the thing lasted forever,  but at $5-10 you could keep a few extras in your desk drawer, just in case.

Then in the 90’s the laser jet became the thing.  My experience with these was that you either got a good one or a bad one.  I had one I liked a lot, an HP Laserjet 5L, that was capable of printing large manuscripts without jamming, so long as I kept feeding it paper.  I bought the same model for a friend, and it was nothing but problems.

Now we’ve got a Lexmark Pro 205 wireless printer, which is mostly used for the kids homework, and it honestly couldn’t be a bigger piece of crap.  Literally, every time one of the kids needs to print a report, I end up spending a minimum of 2 hours doing tech support trying to get the damned thing to produce a handful of pages.  Fun stuff like:

The short version: my experiences with both this printer, and it’s predecessor, a Canon All In One Pixma, are that Ink Jets are seriously bad technology.  Neither one ever gave me even the slightest hint of reliability.  I have a failure rate when I hit the print button of nearly 95% and run through reams of paper, gallons of ink, and too many hours of my time to count before I can cajole either into producing an even slightly passable printed product.
The long and the short of this is that I’ve gone over to requesting my daughters email me anything that needs to be printed before 5pm everyday so I can print it on the office printer. Eventually, I’ll go over to Staples and buy myself a nice, new dot matrix printer.  Maybe there are still a few Epson LQ 590s around somewhere…