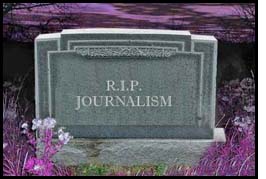 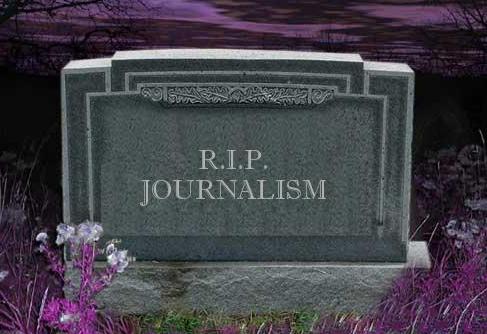 In the end, it wasn’t the Internet, or televsion or even bad management that killed journalism; we did it to ourselves.

When I was in college, we held up the Bob Woodwards of the world as our mentors.  The story mattered above all else.  No matter who it was, it was the journalists job to expose corruption.  We were to be that shining light in dark places.

This election cycle has shown us the lie in that.  We’ve got supposed journalists falling all over each other to produce dubious “fact checks” based on a pyramid of half truths and deceptions carefully spoon fed by the campaigns.  The keyword now in politics is “control the narrative” and that means finding ways to get their version of the story out.

To be clear, as a journalist, you cannot spin a story.  Propagandists spin stories, PR flacks spin stories, journalist report.  We are meant to be that sharp probe stuck into sensitive areas.  Not some dull mouthpiece regurgitating the party line.

It’s not that it’s one side or the other that is the problem, it is that it have become utterly apparent to everyone that media has a side.  The right, Fox, and in opposition MSNBC. Too many issues have been left alone.  Far too many.

For example, how is it we have an ambassador killed in Libya, yet none find fault with our government.  To be clear, their “it was the video” mantra was an obvious fabrication. The truth, that it was a coordinated attack by terrorists, and even worse, that we had repeatedly denied requests for more security, and in fact, removed 34 security personnel over the previous 6 months, was concealed and only now comes to light.

Are there still bright points: to be certain.  One has only to look at the work done by Univision on the Fast and Furious scandal.  Another story most media shied away from for over a year. (I link to ABC News – their English language partner)

To be fair, I could just as easily link to instances of press ignoring CIA lies about Iraq having weapons of mass destruction etc.

We cannot allow journalism to die.

One Reply to “Death of Journalism – In the end, it was us all along”